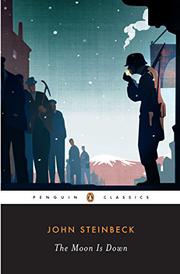 THE MOON IS DOWN

This seems a simple — almost an obvious book — until its overtones and undertones begin to do their deadly work. Then one realizes that, compact in less than 200 pages, is the story of what is happening to the conquerors and the conquered the world over, today. The yeast of freedom, of democracy, the soul of unconquerable man, is working to destroy those who deny freedom. No country is named — but it might be Norway. No person nor persons are named — but their types are truly drawn. Mayor Orden stands as a hero with none of the trappings of heroism. Curseling, the traitor, epitomizes the Quislings of the world. And the story? A tale of the unnamed men and women who are breaking the morale of the conquering beast with silence, hate, mass resentment, and the use of weapons forged by imagination and passion while the weapons of the enemy become powerless to break their strength, their unity of anger. An extraordinary achievement.