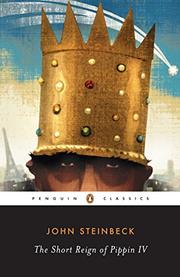 THE SHORT REIGN OF PIPPIN IV

Frankly, I don't know what John Steinbeck was up to in writing this extravaganza, this dubious satire on French politics. He doubtless had a good time in the process, as with tongue in cheek he lambastes the intricate absurdities of the French political system. A fairytale it is, complete with Cinderella theme, as an obscure astronomer, who happens to have royal blood in his veins, is sought out by a desperate political group to restore the monarchy. Unwilling, bored with what it entails, he sets out to wander among his people incognito and upsets the new regims by proposing far reaching reforms that appeal not a whit to the nobility battening on his rise to empty power. That- with Steinbeck's name as magic wand-it might just happen to captivate some readers seeking an offbeat fantasy, is something one cannot foresee. But for the most part, the Steinbeck audience will be let down- and others who seek new flavors may not find it sufficiently tart for their taste.