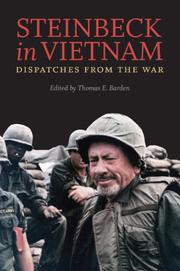 Dispatches from the War

A collection of the pro-war pieces filed from Southeast Asia for Newsday by the Nobel laureate not long before his death.

Editor Barden, a Vietnam veteran and professor (English/Univ. of Toledo; editor: Virginia Folk Legends, 1991, etc.), mostly lets Steinbeck speak for himself in this motley collection of columns that the author framed in the form of letters to Alicia Patterson Guggenheim, the deceased editor and publisher of Newsday, whose husband was continuing in her stead. Barden sandwiches Steinbeck’s columns between an introduction and afterword and intrudes in the text with only a handful of parenthetical explanations—reminding us, for example, who Lurleen Wallace was. Between December 1966 and May 1967, Steinbeck filed pieces that sought to support the U.S. effort in Vietnam, to lionize the soldiers whom he met (and with whom he occasionally ducked incoming rounds), to expose the dimensions of Viet Cong and North Vietnamese violence against civilians, to chide the liberal media for ingesting without question the enemy’s propaganda and to urge other writers (he names Updike, Williams, Bellow, Albee and Miller) to travel to Vietnam to see the war firsthand. Steinbeck did not just sit in Saigon and bloviate; he went to various sites around the country and flew in helicopters and, in one case, the plane dubbed Puff the Magic Dragon, a night mission that frightened him, prompting him to write of mortality. He also offers some tactical suggestions that seem bizarre and naïve: dropping thousands of transistor radios (with earplugs) via paper parachutes over the countryside so rural people could hear the truth; training Saigon street urchins for espionage. Steinbeck’s positions later softened, but not in the pages of Newsday.

Sometimes Steinbeckian in texture and bite, but often tone-deaf, tendentious and surpassingly sad.