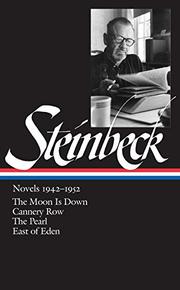 A collection of Steinbeck novels from his last notable period, which ends with his ambitious Salinas Valley epic, East of Eden, published when he was 50. Although Eden was followed by Sweet Thursday, Travels with Charley, the script for Viva Zapata!, The Wayward Bus, The Winter of Our Discontent, The Acts of King Arthur and His Noble Knights (Steinbeck’s reworking of Mallory’s Morte d’Arthur), and other plays, scripts, and nonfiction works—and by his receiving the Nobel Prize—depression and illness dimmed Steinbeck’s flame for his last 16 years, and these later works will not make the cut for a fourth and final Steinbeck volume in Library of America. He began The Moon is Down (1942) as a contribution to the war effort, placing it in a midsize American town under occupation troops, but when it was turned down as no morale booster, he rewrote it as a play set in a nameless Nordic country, then novelized it. Editor DeMott also includes his richly woven short novel, the timeless Mexican parable The Pearl, and the rather sentimental Cannery Row.