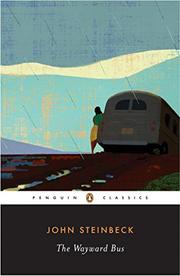 Evidently even John Steinbeck "takes a walk" now and then. This is it. We hope he doesn't continue to walk downhill. For here is a book that will inevitably be a bitter disappointment to those who have put John Steinbeck at the top of the roster of American writers today. Always before his bums, his down and outers, his "under-privileged", his Okies, his itinerant workers, his drifters have invoked a certain magnetic fascination rootet in the sheer love of their creator for his creations. Some have accused Steinbeck of being sentimental about his people. Nobody could accuse him of being sentimental about any of the unprepossessing aggregation of unpleasing humanity brought together at a wayside safe from which a short line bus operates. There's the proprietor, driver of the bus, Juan- least objectionable, perhaps, and warmed by a spirit of charity. There's his temperamental, possessive and violent wife, Alice, who takes out her spleen on all and sundry, with flies and the downtrodden hired girl, Norma, as chief victims. There's Pimples-most unpalatable of adolescents, who is a mechanic of sorts, sex ridden and depraved. And then there are the passengers held over while the bus is repaired- an unsavory lot, from the Pritchads, who hated each other but tried to put up a front as a united family, to the salesman with a suitcase full of rather morbidly unpleasant tricks, and the girl whose sex lure provided the flash which set off the latent dynamite. The story is a slight one, and rarely does it emerge from the mire of fleshly obsession, the mark of language and motives and concentration on the physical. A thoroughly distasteful and unpleasant book, unredeemed by the flash- the spark that to most justified anything John Steinbeck wrote. Because what he does well, he does so extraordinarily well, it is all the more appalling when he descends to the depths of vulgarity.