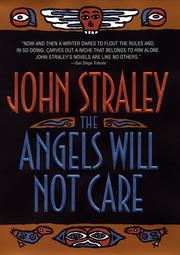 THE ANGELS WILL NOT CARE

Cecil Younger is depressed. But then Cecil—by his own assessment least successful p.i. in Sitka, Alaska—is chronically depressed. He moans, he pouts, his natural state is unrelieved weltschmerz (Death and the Language of Unhappiness, 1997, etc.). As his fifth outing gets underway, however, Cecil’s melancholy has a legitimate basis for once. Inadvertently, he triggered the suicide of a friend—an act well-meant but misguided—and he can—t forgive himself. Much of Sitka is equally unforgiving. Unemployed, unloved—even his girlfriend Ann Marie seems distant—Cecil spends his time what he does best: moping. So when he’s offered a gig on the good ship S.S. Westward, Ann Marie stirs him into action. But, in truth, the Westward is not such a good ship if untimely deaths are any measure. Cruises are its business, but this ship’s cruises are of a most unconventional kind, inasmuch as so many of her passengers book one way. It’s a ship full of mysteries, Cecil discovers. And full of murder suspects, including for a brief, dismaying period, the detective himself. Working up a sympathy for sorrowful Cecil isn—t always easy. But he can be charming, wryly funny, even insightful. Straley writes extremely well—a talent that enlivens his Alaskan background. A bit of backbone stiffening might do the same for his hero.