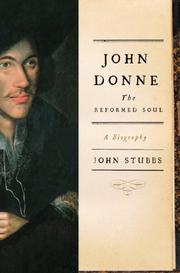 A major biography of the poet and preacher, who knew Shakespeare, accommodated himself to three difficult monarchs and left behind a significant literary legacy.

In his impressive debut, Stubbs moves with ease through the complex life of a man who lived in a time of profound religious, political and cultural upheaval. Because John Donne (1572–1631) was such a public person for much of his life—a poet, a bureaucrat, the Dean of St. Paul’s—and because a number of his regular correspondents kept his letters, his biographer has much documentary evidence to support this account. Born into a Catholic family, Donne learned to adapt his views and behavior to the prevailing political and religious mood. He also, Stubbs ably demonstrates, retained his humanity and moral integrity. He left home early for Oxford but received no degree because he could not sign the religious Oath of Allegiance. (Later, James I made certain that Cambridge awarded Donne a doctorate.) He lived and studied law at Lincoln’s Inn, sailed with Essex and Ralegh, earned a powerful position as secretary to Sir Thomas Egerton, spent some time in the House of Commons. But he nearly lost it all in 1601 when he secretly married teenaged Ann More, enraging her family and annoying Queen Elizabeth. Ann subsequently gave birth to a dozen children and died shortly after delivering a stillbirth in August 1617. (Stubbs is not always so specific about dates; a chronology would have improved the book.) By then, Donne had turned his back on the secular world. Noted as a bachelor for his popular satires and sexy poems, he was chastened by poverty and the struggle to support his family; some powerful friends and James’s royal caprices persuaded him to take religious vows early in 1615. He became one of England’s most influential preachers—in his lifetime and beyond.

Donne would be pleased with this intelligent, affectionate, articulate telling of his story.