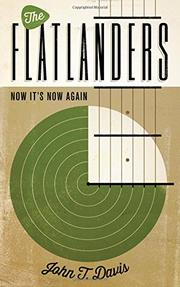 Conservative West Texas spawns radical creativity and lifelong bonds of friendship in this story of an unlikely band.

Even readers who are music fans may know little about the Flatlanders, though devotees for whom “the Flatlanders’ songs were the Rosetta Stone of West Texas music” will likely know the story well. More than 40 years ago, three boyhood friends and some fellow travelers journeyed from Lubbock to Nashville to cut an album, which was not released at the time. Subsequently, Joe Ely became a cult favorite as a honky-tonk rocker and dynamic live performer (championed by both Bruce Springsteen and the Clash), and his recordings of songs by Jimmie Dale Gilmore and Butch Hancock spawned music careers for those two former Flatlanders as well. They continued to remain close while pursuing divergent musical paths before reuniting to record and perform after the turn of the century. Veteran Texas journalist Davis (Austin City Limits, 1999) knows these musicians well, as well as the culture that spawned them, so it’s surprising that he relies so heavily on secondary sources, from which he quotes liberally without providing full information (referring to a magazine piece without the article’s title, author or year, for example, or naming the writer without the publication or year). Perhaps a tight deadline was a problem, for there is also plenty of repetition of information that wouldn’t have survived a more thorough edit. Yet the author remains a colorful wordsmith, describing the adventurous Hancock as someone who “keeps more irons in the fire than a blacksmith on Benzedrine,” and the principals themselves are great storytellers. Describing the Flatlanders’ circuitous route to some semblance of success, Gilmore says, “Joe used to say that none of us had a thimbleful of ambition. But between the three of us, we had a towering lack of ambition.”

A celebration of music made in the spirit of friendship rather than careerism.