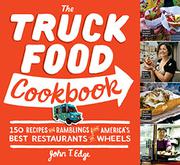 In cities such as Los Angeles, Minneapolis, San Francisco, Houston and New York, the author gathered recipes that range from the familiar with an ethnic twist (sumac on tater tots) to regional fare (Portland poutine) to fast food (burgers and tacos) to healthier concoctions (Ethiopian lentils and tuna onigiri). Many employ simple ingredients, as well as flavorful sauces and marinades. Whether served in hearty or bite-sized portions, they are often characterized by their portable, comforting nature. Readers who may have initially equated “truck food” with greasy spoons will be pleasantly surprised to discover that quick methods such as deep-frying are limited, as are the more excessive creations, including a grilled cheese cheeseburger. Adventurous palates will also find fusions such as Kimchi quesadillas and crepes with chicken, veggies and coconut. Edge contextualizes his topic with well-considered introductions to each section—“Fries and Pies,” “Waffles and Their Kin,” “Brunch on Wheels,” “Unexpected Pleasures,” ”Sandwich Up!, “Rolling in Sweets,” etc.—and to the recipes. He also provides background on topics of interest to food-trivia enthusiasts, from the popularity of sriracha to tidbits given by the cooks he encountered. The book is especially noteworthy for its vibrant portrayal of cities as hotbeds for innovation.

Despite their fleeting nature, these creations endure in a winning combination of graphic design, cross-cultural flair and writing on one of the staples of the urban food landscape.

THE TASTE OF TOMORROW
by Josh Schonwald
Nonfiction

THE AMERICAN WAY OF EATING
by Tracie McMillan
Nonfiction

TASTE WHAT YOU'RE MISSING
by Barb Stuckey
Nonfiction