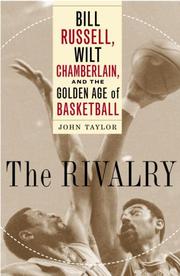 Bill Russell, Wilt Chamberlain, and the Golden Age of Basketball

It’s a long-standing conundrum for sports fans: Do we cheer for the virtuoso prima donna who plays by his own rules, or do we cast our lot with the exemplary team player who plays fair and wins all the same? The question animates Esquire writer Taylor’s (The Count and the Confession, 2002, etc.) portrait of the race between Bill Russell and Wilt Chamberlain to dominate the NBA, a race that proved so newsworthy, and so freighted with drama, that it helped make basketball a major sport. Boston Celtics center Russell played, after all, for a team that was “a purely commercial afterthought in a sport without strong roots in the city’s culture,” and in an arena that was seldom more than half full; Chamberlain, playing for the Philadelphia Warriors, came aboard a team that had been an afterthought, too, until he brought his impossible-to-defend fadeaway shot. Well over seven feet tall (he would not allow himself to be measured), Chamberlain was a star, and he acted the part; the marginally smaller Russell played as part of a well-tuned team. From the time they first faced off, in 1959, each knew that the other was the competition. Chamberlain—hailed as “probably the greatest athletic construction ever formed of flesh and blood”—got the better press, especially after Russell began to espouse black nationalist views; yet Russell neatly matched Chamberlain in ability, so well, in fact, that Boston was “the only club in the league that did not feel it necessary to double-team Chamberlain.” In their final showdown, a decade later, Chamberlain behaved very oddly, Russell denounced him and their rivalry took a bitter turn for years after either figured on the court. Taylor’s account of this singular contest is a highlight of a book full of fine moments.