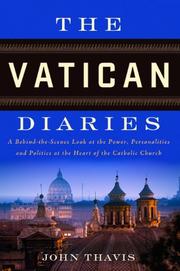 A Behind-the-Scenes Look at the Power, Personalities, and Politics at the Heart of the Catholic Church

A seasoned reporter on the Vatican beat takes us for an irreverent and revealing visit.

Frequently from the vantage of the reportorial fly on the wall, Thavis, retired Rome bureau chief of the Catholic News Service, looks candidly at the goings-on at Saint Peter’s. His report, even without comment on the problematic events at the Vatican Bank, serves as a case study in management—and mismanagement—at a considerable worldwide enterprise with 400,000 priestly representatives. Though much history resonates throughout all church events, Thavis concentrates on the history he has witnessed firsthand, including the process of bell-ringing on the naming of a new pope and the work of various functionaries in the organization. We learn of the fight to save a unique ancient cemetery against the need for more underground parking and how the matter of the Legion of Christ was bungled when its founder was revealed as a thieving predator and why His Holiness didn’t deal with an anti-Semitic bishop. Thavis also relates his time on the road with the pontiff and notes a futile visit by George W. Bush. He reviews the stalled drives to canonize the late John Paul or Pius XII, whose wartime role is still debated. Especially provocative are the chapters dealing with the mismanagement of diverse sex scandals and, finally, an appraisal of the opaque personality of Benedict, who seems, at least in public, detached, disengaged and often distracted. Like many in political life, the incumbent pope’s remarks are subject to considerable spin, “part of the great communications disconnect at the Vatican.” (Yet now His Holiness has acquired the Twitter handle “@pontifex.” How it’s used remains to be seen.)

Not only provocative, this report is illuminating and fully accessible to members of the faith and doubters alike.