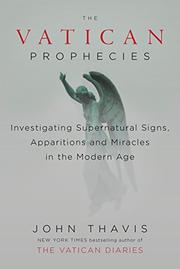 Investigating Supernatural Signs, Apparitions, and Miracles in the Modern Age

From angelic apparitions to demonic possessions, the realm of the supernatural makes its presence felt in Catholic communities around the world—but the Vatican often maintains a certain distance.

Former Catholic News Service Rome bureau chief Thavis’ (The Vatican Diaries: A Behind-the-Scenes Look at the Power, Personalities and Politics at the Heart of the Catholic Church, 2013) second book is a lively, far-reaching exploration of the paranormal aspects of the Catholic faith, investigating both the role that such phenomena play in the lives of parishioners and the official stance of the institutional church. Given his previous job, the author is well-positioned to tackle this subject, bringing to bear an impressive knowledge of the inner workings of the Catholic bureaucracy. Relying on correspondence and interviews with a panoply of colorful characters, he introduces readers to an embalmer described as “taxidermist to the saints” and to a nonagenarian exorcist who “says he has performed more than one hundred thousand exorcisms…[and] believes that Hitler and Stalin were possessed, that yoga is Satanic, that Halloween is a devil’s trick, and that Harry Potter books can open a dangerous door to the world of black magic.” Each chapter begins in an ethnographic vein, probing how the faithful respond to a certain type of perceived miracle or relic, before transitioning to a political and theological analysis of how the Vatican determines the authoritatively endorsed perspective. Frequently, as with the Marian visions at Medjugorje, this is one of carefully worded ambiguity, cognizant of the potential inexplicable events have to attract believers but mindful that “excessive attention” to the supernatural “is considered spiritually unhealthy for Christians, a distraction from their journey of salvation.”

While Thavis makes no attempt to verify or disprove the authenticity of the phenomena he covers, his book is an engaging introduction to the subject for lay readers—though it may prove dull for those expecting the drama of The Da Vinci Code.