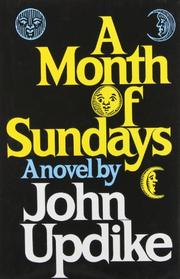 A MONTH OF SUNDAYS

Purely and simply, or rather impurely and not so simply, this is the Updike man, whether in vestments or not, we have often met before — the lacerated Calvinist, here a Barthian (Barth after all is the most unobtainable — "opacity triumphant"), as divided as sin and salvation particularly when it comes to adultery which is our inherent and inevitable condition. Specifically the clergyman is Tom Marshfield, at the moment spending a month in "detention" for his "retraction" — writing "ad libidum" the annals of his fall in a fashion which is filled with a lush, explicit eroticism and sly punning that stretches from nave to navel and is so predictable in Updike. And also filled with "play and pain and display," otherwise known as self-love and self-loathing and self-indulgence, as Tom looks back on the first lapse with Alicia, his organist, distracting in her panty-hose and more so without them, then a second submission to one of his ministry, before he is besieged by his entire female flock and sent off in the desert. "What a paradox it is, dearly beloved, in a nation where every motel room unavailingly offers a Bible for the perusal of travel-worn salesmen, bickering vacationers, and headlong fornicators secluded with eager 'fornacatrices' that this passel of disgraced and distracted ministers should be uniquely denied the consolation and stimulation of this incredible, most credible book!" And what a bottomless cul de sac it is for Updike as well as for Tom — this prurient condition of man, no matter how married he's still left to burn, shriving and unshriven. A feat of sorts as well — although many readers will be uncomfortable in the hot seat that is his pew.