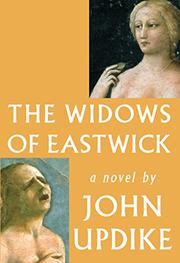 THE WIDOWS OF EASTWICK

Once again summoning characters from his previous books, Updike catches up with the fetching trio of amateur sorceresses introduced in The Witches of Eastwick (1984).

Though they share the state of widowhood, geographical distance and the whims of fortune have long since separated the women. There’s Junoesque Alexandra (“Lexa,” the eldest, having reached 70-something), surviving in Taos, N.M., on her late husband’s modest estate; tightly wound Jane, who married money and now has oodles of it; and resourceful Sukie, who has channeled her pert sexuality into a string of bestselling romance novels. Deflecting mortality’s momentum by compulsive traveling (Canada, China, Egypt—each “done” memorably, thanks to Updike’s unerring grasp of revelatory indigenous detail), the reunited trio undertake a summer in Rhode Island, where their “coven” was formed, and dangerous mischief was performed. Old acquaintances, victims and enemies greet and threaten them, and Lexa’s nagging fears of bodily breakdown and looming death create an inhibiting atmosphere of entrapment. Their former collaborator in sexual malfeasance, Darryl Van Horne (memorably enacted on film by a leering Jack Nicholson), has left potent traces of his influence. This is a most curious novel. Updike haters will quickly point out its lax pacing, encyclopedic sufficiency of laboriously assimilated information and tedious fixation on lubricious sexual detail. Admirers will note its seamless blending of dexterously plotted narrative with penetrating characterizations that evoke with nearly Tolstoyan poignancy the weary, resigned clairvoyance of old age (e.g., Lexa’s intuition that “the cells of my body are getting impatient with me. They’re bored with housing my spirit”).

A work of old age that takes its time, gently drawing us into its knowing orbit. We inhabit this story as we do the later stages of our own lives. Some will not like the book, but it is a vital part of the Updike experience.