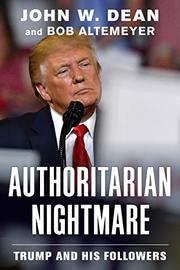 Trump and His Followers

In which the characters of the sitting president and his followers are weighed and found seriously wanting.

“Anyone who has had a serious ‘discussion’ with a Trump supporter may have noticed that facts and logic bounce off right off them.” So write Dean—yes, that Dean, still going strong nearly half a century after Watergate—and Altemeyer, a Canadian psychologist who developed the RWA [right-wing authoritarianism] Scale. That RWA test, among other measures, helps explain a great deal about Trump’s supporters, whose numbers might seem to be dwindling but whose convictions grow ever stronger. Those who score high on the RWA instrument are revealed to believe in a welter of confusing and contradictory matters, have considerable difficulty in sorting fact from fiction, and have no problem with double standards. “Take their ready acceptance of Trump’s labeling Hillary Clinton as Crooked Hillary" when Trump's actions regarding charities in New York state "was so illegal that the state has banned him from ever operating a charity in New York again. Thus, there is no doubt about Trump being Crooked Donald, who has single-handedly given charity a bad name." That doesn’t faze the pro-Trump crowd, who give him a free pass precisely because, according to the test, they are fearful that their world is disintegrating and are in need of a strongman to protect them from a host of imagined evils. By the authors' account, Trump is nothing but a chain of personality flaws (“His driveway has not reached the main road for a long, long time”) that he learned at the feet of his master, Roy Cohn, and secondarily from Richard Nixon, such lessons as “if you have a vulnerability, tell everybody your opponent reeks of it.” Whether Trump gains a second term or not, the authors conclude, the strong authoritarian base that exists in the country guarantees continued polarization for years to come.

A book that won’t change minds but that will give anti-Trumpers plenty of grist for the mill.