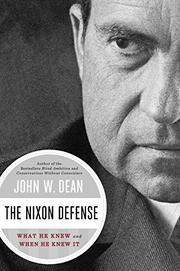 What He Knew and When He Knew It

About that 18-and-a-half minutes of lost tape….

In this 40th anniversary year of Richard Nixon’s gloomy evacuation of the White House, former staffer and ever since bête noire Dean (Broken Government: How Republican Rule Destroyed the Legislative, Executive and Judicial Branches, 2007, etc.) defends himself against a category of accusation Tricky Dick frequently leveled against him: “I’m not going to fire a guy on the basis of a charge made by Dean, who basically is trying to save his ass and get immunity, you see.” Well, sure: Dean was and is no dummy, and he saw what was coming in the grim swirl of the Watergate hearings, during which frequently named figures such as Ehrlichman, Haldeman, Hunt, Liddy, Mitchell and Dean himself became household names. By the author’s account, Liddy—never likable but always honorable, in his own way—took the fall for the foiled break-in and offered to have himself shot on any street corner in Washington at the president’s pleasure; the president declined, but he schemed and maneuvered in other directions. Sometimes, Dean notes, Nixon was brilliant in that maneuvering, turning potential losses into double-edged wins, usually Pyrrhic but still damaging to the opposition. This account, drawing on notes, scrawls on legal pads and transcripts of taped conversations, makes an odd but compelling stroll down Memory Lane for those who remember the time. Dean provides deft portraits of the likes of the unctuous Kissinger, the exceedingly odd Al Haig (“he’s a little bit obnoxious and doesn’t wear well with people, which would be good from our point of view”), and Nixon himself. And as for that missing tape, the one about which so much was made at the Watergate hearings? It would spoil the surprise to tell it here, but Dean has the answers.

Essential to anyone’s library of Nixoniana.