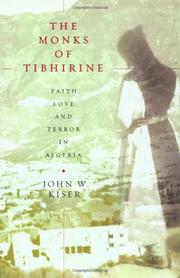 THE MONKS OF TIBHIRINE

Faith, Love, and Terror in Algeria

A heart-wrenching tale of French monks slaughtered by Islamic extremists in Algeria.

Not because they were Christians, the author argues early on, but because they refused to leave their Muslim friends. Their murderers didn’t necessarily see it that way, however. The 1996 massacre of the seven monks at the Tibhirine monastery in military-controlled Algeria was part of a radical Islamic wave that killed foreigners of all stripes simply because they weren’t Muslim. Kiser personalizes this tragic episode of recent history. His painstaking characterization of each monk, especially the prior of the monastery, Brother Christian-Marie, makes this an incredibly emotional story. A former officer in the French army who fell in love with Algeria during the country’s war of independence, Brother Christian-Marie raised the eyebrows of other Trappists with his studies of Islam. He was supposed to devote his life to contemplation; instead, he focused on how he might bring his little Christian community closer to the Muslim world surrounding it. Local Muslims loved the monastery in return, viewing the monks as holy men who could be depended upon for food and medical attention. In his debut, technologies broker Kiser builds up the drama leading to the monks’ death with the skill of a novelist. Anti-government rebels who want to purge Algeria of non-Muslim influences visit the monastery but are held off at first by Christian’s combination of piety and brusqueness. As the crisis mounts and other non-Muslims are killed nearby, however, the steadfast monks grow fearful. They band together even more closely and send their youngest member off to France to continue his studies. The reader feels helpless as the kind and harmless brethren await their doom. When the prior and his monks are finally carried away and killed, their pointless deaths illustrate the consequences of vengeful religion.

Muslims and Christians can live together, Kiser’s poignant narrative asserts, and extremism comes to no good end.