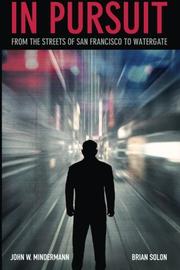 from the streets of San Francisco to Watergate

Mindermann’s personal story as a San Francisco police officer who became an FBI special agent in Washington, D.C., during the Nixon administration.

Mindermann worked as an FBI agent on Watergate and witnessed the shadowy intrigue that episode trailed in its wake, including the FBI occupation of the White House—Secret Service turf—and the “swirling, ethically confusing” dance of Washington’s subculture of undercover operations. By the end of this particular tale—with its on-the-spot anecdotes, finding and following the money trail, and profiles of major characters, including acting Director L. Patrick Gray and Mark Felt (Mr. Deep Throat)—few will contest Mindermann’s suggestion that “Watergate was an FBI story,” with all due respect to theWashington Post. Following Mindermann, as he details the tarp thrown over the break-in, for all its holes and gaps, highlights the collective smarts of the agency. The action switches to Mindermann’s years growing up in San Francisco, nicely documenting why he is one tough character, and joining the San Francisco Police Department, with a fine array of fleet stories involving bar fights, police corruption, drunks and druggies, and a terrifying story of a near lynching: “That evening I’d come face-to-face with the potential for human barbarity.” Mindermann has a taste for Sergeant Friday stylization—“I targeted the most hardened, felony prone hoodlums, whose rap sheets vividly revealed a criminal panorama,” “a foreboding chill swept over me”—but it works well here, for Mindermann spent most of his life in the company of murderous bottom feeders, and the chronicles of their takedowns benefit from his Technicolor delivery. After joining the FBI, the author was not only involved with plenty of high-profile operations, such as the John DeLorean sting, but he notes that he was a pioneer on the poison of stress in police work and helped developed criminal profiling (as a refined police tool rather than excuse for bigotry).

Both sophisticated and rowdy, Mindermann reminds us that the cops and FBI often wore white hats during their darker days in the 1960s and ’70s.