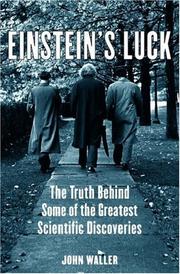 The Truth Behind Our Greatest Scientific Discoveries

An iconoclastic, decidedly revisionist look at the hit-or-miss business of science.

Forget everything you know about snakes swallowing their own tails and the burning of blue, gemlike flames. All too often, writes Waller (History of Medicine/University College, London; The Discovery of the Germ, not reviewed), science evolves despite the institution of science, in which the race goes not to the most elegant solution but to the fellow with the biggest research grant and the most political power. Waller merrily revisits several famous moments in science, among them Pasteur’s elucidation of germ theory, Robert Millikan’s divination of the electron, and Einstein’s development of relativity theory. In this account, none happened quite the way the textbooks tell us they did. Pasteur, for instance, fudged results, stole his assistants’ ideas and passed them off as his own, refused to replicate results, and “suppressed a considerable amount of negative data” along the way to pasteurization; moreover, he could never quite reconcile his reactionary political and religious beliefs to what his experiments told him about the invisible world. Millikan essentially blundered his way to finding the electron, beset by the ever-shifting value of e and glad to overlook inconsistencies in the data; “had he not been judged correct in the long run,” Waller harrumphs, “it’s likely that modern commentators would invoke his story as a homiletic warning against reasoning from weakly attested theories.” As for Einstein: suffice it to say that Arthur Eddington’s astrophysical proofs of general relativity were a lucky hit for all concerned. Waller’s interest lies more in the telling anecdote than the overarching moral, but he does a good job overall of showing the role of accident—and referees willing to look the other way—in the everyday work of scientists, whether conducted in Dr. Lister’s filthy operating theater or in the most gleaming of labs.

An informal, often entertaining excursion in the history of science.