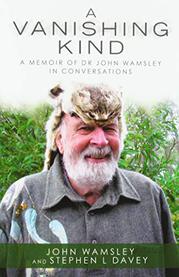 A Memoir of Dr John Wamsley in Conversations

In 2003, Australia’s prime minister named Wamsley Environmentalist of the Year. Wamsley’s memoir, one co-written with Davey, refreshingly touches on relevant portions of the environmentalist’s childhood and zeros in on what readers want to know: Who is this controversial environmentalist, and what was his impact on the preservation of endangered animals and plants? In excerpts from recorded interviews, Wamsley says: “I would gladly give my soul to the devil, to roast in hell for an eternity, if I could save one species of wildlife in exchange.” Davey makes cameo appearances in the story, describing the environmentalist as “unique and disciplined.” Wamsley’s radical work drew strong criticism. A segment of animal welfare activists vilified him as the “cat-hat man” after he wore a hat made of a large feral cat pelt to an award ceremony. The shock value drove his point home that feral cats and foxes posed an existential threat to certain marsupials (among them kangaroos, wallabies, platypus). The book explores the hot-button ethical issue of whether killing one species of animal to preserve another is justified. The co-authors feel strongly that it is, and Wamsley refers to the practice in scientific terms (prey switching) and notes that he “only shot one cat” in his lifetime. In 1969, Wamsley created Warrawong, an animal sanctuary. The author also protected the indigenous trees and plants in Australia’s natural habitats. To his surprise and delight, certain plants that produced a continuous supply of nectar attracted native birds year-round. Wamsley went on to establish a network of wildlife sanctuaries across Australia. The book includes period photographs and editorial cartoons from local newspapers.

A well-crafted story about a commitment to conservation.