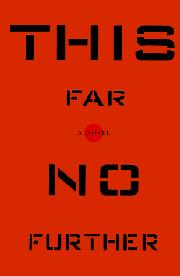 THIS FAR, NO FURTHER

Ten years after losing his license—he killed the henchman his client Eduardo Martinez sent after him when he refused to send Martinez's missing daughter Angela back home to her father's rapacious arms—an ex-p.i. called Harding is out of prison and back on the payroll again, working a job that's too dirty for his slick former partner Donnie Wilson's agency. Harding's assignment: to get something so damning on cosmetic surgeon Stephen Rosenberg that his estranged wife Elenya will be able to get his secret Swiss bank account written into the divorce settlement instead of getting paid off with the mortgaged house and the temperamental Porsche. It sounds like a simple job, since Rosenberg's appetite for physical abuse hasn't stopped with scarred Elenya, but expanded to include his longtime S/M playmate Lucy Williams, R.N.—and, as Harding realizes on the fateful night he and his girlfriend Alison stake out Rosenberg, some fresh blood who'll rekindle the flames of his affair with Lucy. But even after that stakeout explodes in horrific violence, the revelations keep going deeper—revelations about Rosenberg's sordid antics, about Elenya's sex life, about endless fallout from the Martinez case—until you're convinced Harding's hit bottom. Relax: The descent into hell has just begun. A witches' brew of a first novel that mocks its title on every page—even though long before the final twist, you may have lost track of just who's done what to whom. (First printing of 125,000)