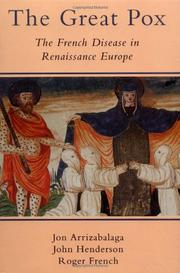 The French Disease in Renaissance Europe

A scholarly investigation of the response in Italy, France, and Germany to the sudden appearence of a seemingly new disease, ``the pox'' (syphilis), in the 1490s. The disease appeared first in Italy, in the wake of an invasion by French troops in 1494 and was quickly labeled ``the French disease.'' Its alarming symptoms included joint pain (so intense, one contemporary chronicler observed, that those infected ``screamed day and night without respite, envying the dead themselves''). Swellings appeared over the body, burst, and left blue or black scabs. Eventually, the disease corroded the features of the face, gnawing down ``as far as the marrow.'' Those infected also, witnesses insisted, eventually developed a revolting odor. To a continent only recently recovered from the Black Death (which had killed a third of Europe's population 130 years earlier), this new disease seemed like an equally lethal calamity. And even though doctors quickly identified sexual intercourse as the method of transmission, the ultimate cause of the disease, as well as effective treatments for it, remained elusive. Some of the devout, considering how the disease was transmitted, felt that ``the pox'' was God's punishment on sinners and required no intervention. Arrizabalaga (History of Science/Consejo Superior de Investigaciones Cient°ficas, Barcelona), Henderson (Senior Research Fellow/Wellcome Institute, London), and French (History of Medicine/Cambridge Univ.) offer a great deal of period detail, but their goal here is not a social history of the new disease. They are most concerned with the differing responses of doctors, municipalities, the Church, and royal courts to the disease. For those interested in such matters, there is much that is fresh and intriguing here. But lay readers, looking for a greater focus on the impact of the disease on society would do better to consult Claude QuÇtel's vivid History of Syphilis.