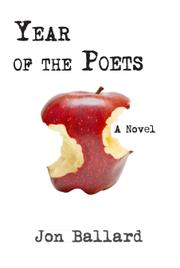 YEAR OF THE POETS

In Ballard’s highly readable, character-driven debut novel, the summer of 1976 proves messy, seductive and life-changing for celebrated poet, wanderer and serial womanizer Arthur Honeyman and all who enter his orbit.

Created as a gesture of personal liberation by farmer’s widow Amelia, the Davenport Summer Retreat for Artists in Michigan is aptly named. The poets and assorted others who have converged on this 100-year-old family farm in 1976 are all in retreat, emotionally and from rocky affairs, troubled marriages, familial relationships, hard choices, former failures and successes. Arthur Honeyman, 59, itinerant carpenter and renowned poet, has hit a fallow stretch. (His lauded earlier work, fueled by rage and bitterness stoked by his now ex-wife, is juicily critiqued by Amelia’s staid son Charlie as “compressed, excruciating blasts of words—opaque stanzas like shrapnel.”) Honeyman also builds benches stenciled with quotes by the likes of Mao Zedong and Janis Joplin, waffles over reuniting with estranged son Pablo, and juggles affairs with married Samantha and nubile poetry phenom Flora. In a delightful little visual, Ballard describes Flora’s painted toes, wiggling in the grass “like the carapaces of hyper blue beetles,” although the author’s fondness for colorful simile can lead to such proximal overindulgences as “the Poet’s bags sat half-packed, lazing like patient hounds at the foot of their master’s bed” and “the farmhouse squatting like a Buddha in the gauzy twilight.” Ballard’s frequent referral to Honeyman as “the Poet,” without a discernable tongue-in-cheek tone, is another distraction. Is the seeming conceit meant to underscore Honeyman’s stature with others? That he lives solely for his art? Is it a sly nod to 19th-century Romanticism? The intent isn’t clear. Ballard maintains his narrative’s robust energy, however, even when plunging lengthily into character-study mode. Over the course of sexual pairings and road trips as far afield as Mexico, lives intertwine on and off the farm, and everyone at the retreat—including pothead and religious college dropout Gideon and Charlie’s secretly far left–leaning girlfriend, Natalia—searches for (and finds, to one extent or other) inspiration, affirmation or at least clarity of purpose.

At times indulgent but a highly enjoyable debut novel.