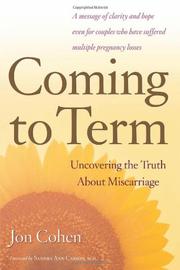 Mysteries, Myths, and the Latest Science of Miscarriage

A deft melding of what researchers are learning about miscarriage, persistent misconceptions about it, and deeply personal stories of women who have repeatedly miscarried.

Science writer Cohen (Shots in the Dark: The Wayward Search for an AIDS Vaccine, 2001) began delving into the subject of miscarriages after his wife had four in a row. Besides exploring the scientific literature, he interviewed and observed doctors working with their patients at clinics (in Boston, Vancouver, and London) that specialize in recurrent miscarriage; he also interviewed nearly one hundred women and their partners about the experience of miscarrying. In “Mother Nature,” Cohen looks at the biology of the female reproductive system, focusing on the mechanisms of miscarriage. Abnormal chromosomes, he reports, are the cause half the time or more, and, as women age, the frequency of abnormalities in their eggs increases. As for other causes, science has few clear-cut answers. In “Mysteries,” Cohen examines and rejects various ideas about causes, including a woman’s faulty immune system and contaminants in the environment. Fetuses, he says, are more rugged than we think, and the environment provided by the female body is remarkably protective. He also offers a warning tale about abortion interventions: the drug diethylstilbestrol, known as DES, once given to women to prevent miscarriage, turned out to cause grievous harm to pregnant women and their daughters. In “Hope,” Cohen tells the stories of couples seeking help in carrying babies to term and provides a close-up look at clinicians who are trying to help them. The success stories of women who carried to term after repeated failures puts a human face on a statistic Cohen uncovered early in his research: those who have had three or more consecutive miscarriages and become pregnant again will, with no treatment, carry to term 70 percent of the time.

While revealing a disconcerting dearth of scientific knowledge about its causes, Cohen’s work on miscarriage is a worthwhile addition to the literature and his reassuring message welcome.