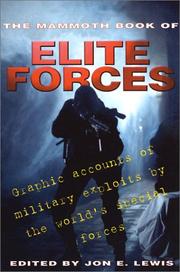 THE MAMMOTH BOOK OF ELITE FORCES

Three dozen accounts, many excerpted from previously published work, of military and paramilitary exploits that will provide long hours of pleasure to buffs.

The titular “mammoth” is accurate, as usual, but “elite forces” is an exaggeration. Many of these dramatic actions involved either regular units—like the U-boat that snuck into Scapa Flow in 1940 to sink a British battleship and the US Marines on Peleiu in 1944, or volunteers from ordinary units, such as Doolittle’s 1941 raid on Tokyo, Merrill’s Marauders fighting till they collapsed in Burma in 1944—and the Flying Tigers in early 1940s China. If paratroopers and engineers are included, most of the accounts involve units with specialized training such as Green Berets, Rangers, Navy SEALs, and British Commandos. In any case, the end results were often spectacular, including some dazzling triumphs and a surprising number of disasters. Lewis (The Mammoth Book of True War Stories, not reviewed) sticks to the years since 1939; all the stories provide fireworks, but the prose quality varies. A witty account of a failed 1942 British raid behind Rommel’s lines mostly describes a long, long walk across the desert to safety. A few chapters, like the one recounting a battle during the Falklands War, are written in turgid militarese. Plenty of incidents are also old-hat: the Israeli hostage rescue at Entebbe, the Ranger assault on the cliff at Omaha Beach, the Nazi rescue of Mussolini, disasters at Arnhem and Dieppe. Yet jaws will drop at the tale of one of the greatest sabotage operation in any war, carried out by Italy, a nation not known for its warriors. Three midget subs crept into Alexandria harbor in 1941 and blew up three British ships, including two battleships.

Plenty of excitement and good writing, along with the occasional clunker.