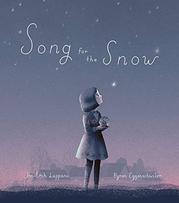 SONG FOR THE SNOW

For the past two winters snow hasn’t come to Freya’s town. Will an old, forgotten song help to bring it back?

In language that is almost poetic, Lappano tells the story of Freya, who loved the way snow looked and felt, and how the air changed when snow was coming. It’s been two winters now since it last came, and Freya is afraid her memories of snow are fading. At the market with her father, “a soft, twinkling melody danced in Freya’s ears.” Following the sound, Freya finds a woman holding a snow-globe music box. She gifts Freya the globe and tells her it plays an old and special song. For generations, says the woman, the song was sung by the townspeople, and some believed it was “the magic of the song that called the snow home.” Back home, her mother remembers the words, but though Freya sings them over many days, the snow does not come. Eventually, she teaches the words to her friends, who take the song home, and soon “the song once again filled their homes and hearts.” And finally (and predictably), the snow comes. Eggenschwiler’s artwork matches the gentle and magical telling of the story with textural illustrations in a limited palette of soft colors. Freya, her family, and the woman present White; the townspeople are racially diverse. (This book was reviewed digitally.)

Bittersweet—would that climate change were so easily solved.