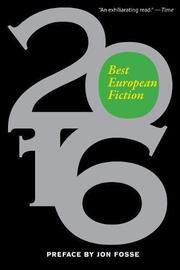 Latest installment in an annual anthology, now in its sixth edition, running the continent from Austria to Wales.

What is literature? That’s the subject of Norwegian writer Jon Fosse’s rather glancing preface, which mostly settles, and then arguably, on what literature is not: it’s not crime fiction; even though crime is about death and the subject of literature at its heart “is death, what it means to die,” literature is too bespoke to admit the mass market. Or something like that. The collection is silent as to the criteria for getting into it, but presumably what we have here is literature. Much of it is about death, in any event. The more pertinent question, perhaps, is: what is the difference between European and American literature? (And why no Iceland, home of ponies and Nobel Prize winners? Why no Russia?) That’s the subject for someone’s doctoral dissertation, but for the moment, suffice it to say that most American writers would not have a protagonist who was moved by the prospect of taking a bus in the morning so that he could have time “just to read Nietzsche.” For Moldovan writer Ion Buzu, by way of his story “Another Piss in Nisporeni,” though, it’s business as usual, and if the diction is a little odd to American ears (“Nyah, loser, screw off!”), the rueful story is a revelation. Just so, most American tales are not as historically and politically charged as Latvian writer Mara Zalite’s “The Major and the Candy,” a Gogol-esque yarn about a sodden encounter between the KGB and erstwhile evacuees from the Baltic. No one dies there, but the possibility is palpable. And death is in the offing, too, in Huw Lawrence’s soulful vignette of ordinary Welsh life, “Restocking,” in which one character meaningfully says, “Nobody is lying in a coffin all day, not even in the Council Tax Offices.”

Take their word for it, then: it’s literature. For sure it’s European, and it’s of much interest to literary readers and writers on this side of the pond.