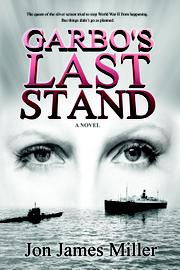 In Miller’s novel, a dying former tabloid reporter tells the story of his 1939 cruise-ship adventure—involving Greta Garbo, Nazis and a beautiful British secret agent—to a young journalist hoping for an exclusive.

In 2000, James Pressman, a hustling young documentary film producer, sits down to interview Seth Moseley. The ancient, emphysema-ridden ex-reporter claims to have a never-before-told story about Greta Garbo from September 1939. Moseley was a struggling New York City newshound then, on the run from gambling debts and desperate to snap a candid photo of the elusive star. Pressman is disappointed—and fired—when Moseley gives him a shaggy dog story instead. Then a slip on black ice lands Pressman in Moseley’s hospital room. Moseley just didn’t like Pressman’s boss, he says, and to make amends, he’ll share the full story of how he stowed away on the SS Athenia and encountered her secret cargo: Garbo. Moseley narrates a romantic, dangerous adventure aboard the ocean liner—the first ship to be downed in World War II—including a liaison with a gorgeous barmaid who’s hiding a secret, tangling limbs with the glorious Garbo and thwarting evil Nazi thugs. Listening to this tale of dawning heroism, Pressman is inspired to make his own bold plan that will fill in the pieces of more than one puzzle, get the story, and win Sarah, his beautiful raven-haired nurse. Miller (Adapting Sideways: How to Turn Your Screenplay into a Publishable Novel, 2010) writes a fast-paced, humorous story well-grounded in fascinating historical details. The characters have more depth than usual for ripping yarns: Both the young Moseley and Pressman have mother issues (James’ died when he was 8); both long for connection while they fear responsibility. Miller adeptly provides historical background and vividly evokes Garbo’s on-screen magic. It’s a drawback that only gorgeous women are worthwhile in this story (an innocent fat woman’s photographic humiliation is played for laughs), but this could be seen as consistent with the star-struck, glamour-dazed natures of both narrators.

An appealing blend of hard-boiled noir and action-movie excitement with a romantic, worshipful heart.