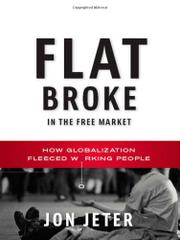 FLAT BROKE IN THE FREE MARKET

As the Washington Post’s former bureau chief in southern Africa and South America, Jeter covered the regimen of free trade, strong currencies and foreign investment preached by Western agencies to help developing nations break free of poverty. This is globalization, Jeter says, and it’s been an unmitigated disaster. He spots compelling human stories in countries where the program hasn’t delivered: the Zambian woman who sells tomatoes 12 hours per day, hoping to make enough to feed her family; the Argentine couple who drink tea for dinner so their kids can have the last of the food; the South African children killed in a fire caused by a candle, used by their parents for light because they couldn’t afford electricity. But Jeter is uneven in his analysis, blaming this new globalized world for problems that existed before and independently of it. For example, the author devotes an entire chapter to the falling marriage rates of African-Americans, due in part to high unemployment rates among black men, which Jeter blames on free trade. Fair enough, but the Moynihan Report warned the nation of the disintegrating black family more than four decades ago. Fortunately, Jeter’s condemnation avoids a misguided call for protectionism. Instead, he proposes that developing nations follow the model of Chile, which has beefed up business regulation and spent public money generously on its social safety net, from health care to education. By investing in its people, he suggests, a country can compete in the new global economy.

Jeter overreaches, but he usefully exposes the underbelly of the free-market system.