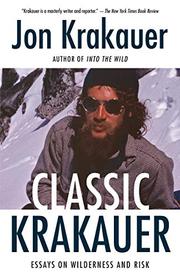 Essays on Wilderness and Risk

Krakauer (Missoula: Rape and the Justice System in a College Town, 2015) gathers essays that were published in magazines such as Smithsonian and Outside from the mid-1980s through the 1990s along with two from 2014. The majority feature awe-inspiring locales that are enlivened by the author’s naturalist eye, and robust action and suspenseful pacing enhance careful explorations of power and innovation. A handful highlight larger-than-life people, including Californian surfer Mark Foo, who drowned at Mavericks (California), “one of the world’s heaviest waves,” and mountaineer Fred Beckey (1923-2017), “the original climbing bum.” Three pieces examine death in the context of industries that include surfing, rock climbing, and wilderness therapy camps. Among the strongest essays is "Loving Them to Death," an exposé on abuse and teen deaths that happened under the neglectful watch of a camp leader. A solid mix of conversations, background, and travel adds up to cleareyed reportage that still shocks. In the reverent, often beautiful "Gates of the Arctic,” memory splices with reflections on the Alaskan Brooks Range and the damaging footprint left by locals and visitors. In two essays, Krakauer considers the future from different angles. In one, the author writes about Mount Rainier and the danger of inevitable mudflows. In the other, Krakauer chronicles his journey with scientists who study microbial life in the hope that it will spark long-term research on Mars. The author effectively balances natural drama with thoughtful reflection and fascinating facts. When the writing is cautionary, it plucks at emotional chords. When it travels wild vistas and tense excursions, it shows Krakauer at his best. A few pieces remain outliers, such as the closing essay, which was delivered as a speech and shuttles toward a reluctant conclusion. A profile of Christopher Alexander, an “iconoclastic architect of international repute,” is less hard-hitting and only mildly interesting.

For fans, a nostalgic stop in a celebrated oeuvre. For newcomers, a welcome introduction to a veteran of the form.