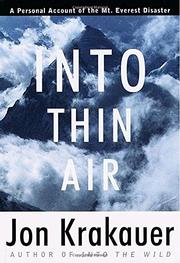 And onto thin ice—Krakauer's (Into the Wild, 1995) hypnotic, rattling, firsthand account of a commercial expedition up Mt. Everest that went way wrong.

In the spring of 1996, Krakauer took an assignment from Outside magazine to report on the burgeoning industry of commercially guided, high-altitude climbing. Many experienced alpinists were dismayed that the fabled 8,000-meter summits were simply "being sold to rich parvenues'' with neither climbing grace nor talent, but possessed of colossal egos. From childhood, Krakauer had wanted to climb Everest; he was an expert on rock and ice, although he had never sojourned at Himalayan altitudes. While it has become popular to consider climbing Everest a lark and the South Col approach little more than a yak route, Krakauer found the altitude a malicious force that turned his blood to sludge and his extremities to wood, that ate his brain cells. Much of the time he lived in a hypoxic stupor, despite the standard acclimatization he underwent. As he tells of his own struggles, he plaits his tale with stories of his climbing comrades, describes the often outrageous characters on other expeditions, and details the history of Everest exploration. The writing builds eerily, portentously to the summit day, fingering little glitches that were piling up, "a slow accrual, compounding imperceptibly, steadily toward critical mass,'' when a rogue storm overtook the climbers; typical by Everest standards, it was ferocious in the extreme. Time collapses as, minute-by-minute, Krakauer rivetingly and movingly chronicles what ensued, much of which is near agony to read. Unjustly, Krakauer holds himself culpable for aspects of the disaster, but this book will serve an important purpose if it gives even one person pause before tackling Everest.

A brilliantly told story, and one that won't go begging when the year's literary honors are doled out.