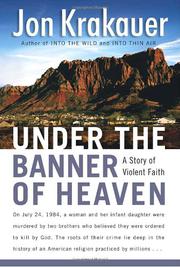 UNDER THE BANNER OF HEAVEN

A Story of Violent Faith

The jarring story of a double murder committed by fundamentalist Mormons, told with raw narrative force and tight focus.

Yet this is far more than just the retelling of a grisly murder, for Krakauer (Into Thin Air, 1997) would like to know what was going on in the heads of the men, Dan and Ron Lafferty, when they killed Brenda Lafferty and her 15-month-old daughter Erica (who happened to be their sister-in-law and niece, respectively), and why Dan, in particular, could be so equi-poised when talking of the event as to display an utter lack of remorse. Finding out requires an extended journey through the world of Mormonism, its history and schisms, and by extension the history of its expansion over the western half of the country. Fundamentalist Mormons differ from mainstream Latter-day Saints in many ways, but their practice of polygamy, notions of blood atonement (revenge), and belief in the importance of personal revelation—their listening to that “still small voice” of God, once a hallmark of Joseph Smith’s religion, until he realized it would compromise his authority in matters of church doctrine—made them outlaws in the eyes of the establishment Mormons. Dan’s “yearning to return to the mythical order and perfection of the original church,” one that had been corrupted by the church hierarchy for years now, led him to fundamentalism, which in turn led him to believe his brother Ron’s revelations: that Brenda and Erica must die for the good of the Lord’s work (that Brenda encouraged Ron’s wife to leave him may have played, let’s say, a small role in the revelation). Krakauer worms deeply into the Mormon religious experience, its fractures, violence, and fight against the growing power of the central government. At the moment “when religious fanaticism supplants ratiocination,” then “all bets are suddenly off.”

Krakauer lays the portent on beautifully, building his tales carefully from the ground up until they irresistibly, spookily combust.