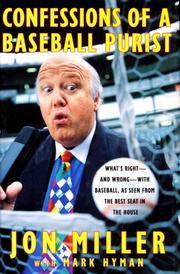 CONFESSIONS OF A BASEBALL PURIST

Play-by-play man for ESPN’s highly successful Sunday Night Baseball, Miller, with Baltimore Sun reporter Hayman, has slapped together a casual record of his career and a friendly look at the game’s recent history as seen from the press box. Once derogatorily described as a —baseball purist— by Bud Selig, baseball’s acting commissioner, Miller goes on record to try to show that he is anything but. He got his start in the big leagues at the age of 22 in 1974 when he was hired by Charlie Finley’s Oakland A’s, he remembers fondly. He would later spend 14 —wonderful years— with the Baltimore Orioles (two separate chapters are devoted to Cal Ripken and his record-breaking streak) and then the Red Sox. He cites current ESPN partner Joe Morgan as —the premier baseball analyst.— Miller lists among his favorite people in baseball former manager Ralph Houk, one of those who left the game —a better place that when he found it.— Reggie Jackson, Kirby Puckett, Joe Carter, and Eddie Murray also rate highly in his book. Miller’s protestations against being dubbed a —purist— yield mixed results: While he grudgingly admits to liking interleague play, he—d like to see it limited to —natural rivalries— such as the Yankees vs. the Mets, or the White Sox vs. the Cubs. At one point, he decries the suggestion that the game needs to be speeded up; at another, he suggests limiting catcher visits to the mound and giving each team four time-outs. And one nearsighted contention should bring on a shower of boos and catcalls from the stands: The fans, he claims, —don—t read salary lists, and they don—t care who wins or loses arbitration,— he writes. —So don—t bother baseball fans with that nonsense.— It’s a good thing Miller keeps this informal and anecdotal, and presents his arguments with a light touch. Otherwise, purists and other fans might feel they—ve been underestimated, if not sold short.