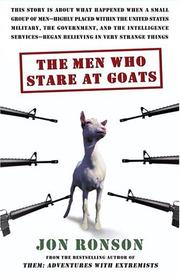 THE MEN WHO STARE AT GOATS

British journalist (Them, 2001) and documentary filmmaker Ronson digs into the various psychic operations of the U.S. armed forces, from their origins in Vietnam to their uses today.

In 1979, Lieutenant Colonel Jim Channon created the First Earth Battalion Operations Manual, expressing the visionary position that soldiers of the future would, among other things, “fall in love with everyone, . . . bend metal with their minds, walk on fire, [and] calculate faster than a computer.” The Army, eager for a new kind of fighter, bought into it, and Ronson now traces the circuitous routes of men who have since attempted to bring the super-soldier into being. The writer’s sources are a mix of ranking military men and fringe characters attracted by the idea of psychic doings. Former U.S. Army Chief of Intelligence, Major General Albert Stubblebine III, who held his post in the early ’80s, recalls his frustrated efforts to get the Special Forces to adopt Channon’s strategies; Special Forces reps failed to disclose that they already had their own psychic division up and running. Stubblebine’s protégé in things psychic, Major Ed Dames, has long been a public face of PSYOPS (psychic operations), principally through his appearances on the same syndicated radio program whose reporting on the Hale-Bopp comet prompted the Heaven’s Gate cult members to kill themselves in the hopes of catching a ride. In his quest into the realms of the weird, Ronson has turned up any number of eerily credible tales: just for starters, there’s murder by the CIA; current torture schemes in Iraq and Guantánamo Bay (some involve playing Fleetwood Mac in prisoners’ cells), and a man who claims to be able to stop a hamster’s heart by staring at it.

Very funny, and packed with oddities. If Ronson doesn’t manage to expose this official hall of mirrors entirely, he still makes an admirable effort, entertaining and alarming in equal parts.