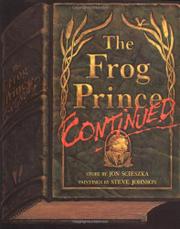 The co-author (with A. Wolf) of The True Story of the Three Little Pigs (1989) assays another humorous embroidery of a traditional tale with somewhat less notable success. The picture of the erstwhile frog and his princess bickering (``Stop sticking your tongue out like that''; ``How come you never want to go down to the pond anymore?'') is genuinely funny, and the prince's quest for a witch to turn him back into a frog—during which he runs into witches from several other tales—is amusing. But the conclusion—glad to get back to his princess, he kisses her and they both become happy frogs—seems limp and unmotivated. Meanwhile, Johnson's paintings, though he adopts some of Lane Smith's fey menace and induces tension by canting his perspectives, lack Smith's wit, imagination, and masterful sense of design. Still, the situation and dialogue are irreverently comical and Johnson's caricatures are adroitly satirical. It's an entertaining effort— just not up to that superlative first book. (Picture book. 5+)