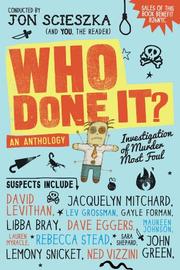 An Investigation of Murder Most Foul

A routine writing exercise filled with in-jokes and carried to ridiculous extremes by a mammoth stable of YA and children’s authors.

Produced to benefit the creative writing program 826NYC, the anthology consists of alibis of various length offered by 83 (!) alphabetically ordered contributors accused of killing evil editor Herman Q. Mildew. Along with making frequent reference to cheese (the stinky sort, natch), pickles and frozen legs of lamb, some “suspects” protest their inability to meet any deadline (Libba Bray) or map out a scheme (“Plotting has never been my strong point. Just read any of my books,” writes Sarah Darer Littman). Others protest that they adored the victim despite his habit of callously rejecting their story ideas, mistreating their manuscripts, insulting their pets, calling them at odd hours and bilking them of royalties. Dave Eggers and Greg Neri provide lists of explicitly described ways in which they did not kill Mildew, Mo Willems and Michael Northrup claim to have been off killing someone else at the time, and Elizabeth Eulberg, Mandy Hubbard, John Green, Lauren Myracle and several others shift the blame to fellow writers. Young readers, even the sort who worship authors, will find their eyes soon glazing over.

Clever in small doses—tedious after the first few dozen entries.