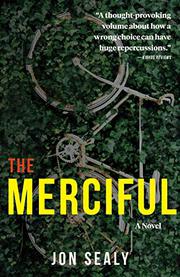 Sealy, the author of The Edge of America (2019), examines a fatal hit-and-run in suburban South Carolina from multiple points of view in this novel.

Samantha James, a college student home for the summer, is struck and killed while riding her bicycle home from her restaurant job in the town of Overlook. Daniel Hayward, a local computer salesman, becomes a person of interest in the crime, and his former college roommate, Jay, attempts to square this heinous act with the kindhearted person he remembers. The prosecutor in the case, Claire Fields, desperately needs a win after a widely reported ethical lapse, and Henry Somerville, an old-money defense attorney, is trying to come back from a social media scandal. At the time of the accident, Daniel was bored with his life and contemplating an affair with a client; Francine, his wife, takes the incident as a sign that she should abandon a loveless marriage. Charlie Gibbs, Samantha’s boyfriend, is a car dealer who gets caught up in a pyramid scheme, and it’s revealed that Samantha was ready to break up with him when she died. The case goes before Judge Kenneth Rhodes, a pioneering Black jurist in the Southern state. Sealy’s clever approach is reminiscent of the parable of blind men describing an elephant, as each character brings not only his or her own perspective but also adds crucial details to the chronology of events. The varying viewpoints also serve to flesh out the relationships among the characters and clarify their motivations. Despite the many players and multiple time shifts, Sealy keeps the narrative running smoothly throughout. His characters are flawed, as is the American justice system as he portrays it. There are no heroes or villains—just ordinary people swept up in a tragic situation; there’s also no uplifting Hollywood ending but rather a truthful conclusion built on compromise.

A thought-provoking volume about how a wrong choice can have huge repercussions.