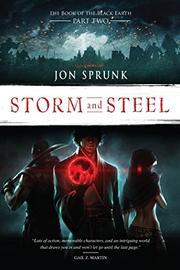 In the second part of The Book of the Black Earth, magic causes more problems than it solves for Horace, the foreign shipwright-turned–sorcerer and military adviser to the queen of a beleaguered city-state.

At the climax of the previous volume (Blood and Iron, 2014), Horace destroyed the Sun Cult’s temple, freeing Queen Byleth of Erugash from their influence. But the Sun Cult and three kings from neighboring Akeshian city-states plot to invade Erugash. In addition, the queen has ordered Horace to brutally suppress a slave rebellion helmed by his friend Jirom and Jirom’s lover, Emanon. While Horace struggles to persuade the queen to consider diplomatic alternatives and to master his powerful but increasingly erratic magic, a mysterious, malign force is engaging in magical assassinations. Could it have anything to do with Lord Astaptah, the queen’s secretive vizier and resident mad scientist? (Of course it could.) The Dances With Wolves/Last Samurai vibe that roiled Blood and Iron—whereby a white guy proves to be better than the darker-skinned natives at a skill they’ve been perfecting for centuries—is gratifyingly damped down here. Horace’s lack of finesse with magic, fielding the complex local politics, and managing his personal life show just how out of his depth he is. And kudos to Sprunk for raising the stakes by killing off major characters—if not the central ones, then at least ones we’d come to care about. There’s also a gratifying lack of certainty about how the story will resolve.

A strong second entry and still a series to follow.