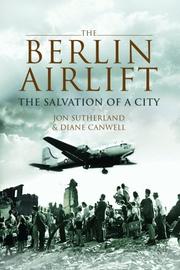 The Salvation of a City

by Jon Sutherland and Diane Canwell

British military historians Sutherland and Canwell begin at the close of World War II, when the Red Army occupied the decimated, starved city. Germany was divided into four zones after its surrender in May 1945, and the Soviets jealously guarded access to Berlin, which lay within their zone but was divided among all four Allies. Food and fuel were urgently needed for the city’s nearly three million residents, but the Russians did not allow supplies to move through their zone into West Berlin. As Soviet-sponsored communist parties seized power in Hungary, Bulgaria, Romania, Poland and Czechoslovakia, the Truman Doctrine guaranteed U.S. support for democracies that resisted. When the Marshall Plan for the economic reconstruction of Europe was set forth in July 1947, the Iron Curtain had already fallen, and divided, vulnerable Berlin came under increasingly restrictive Soviet measures. The crisis was precipitated by the introduction on June 21, 1948, of the Deutsche Mark in Berlin’s three Western sectors. In response, the Soviets declared they would no longer supply food to the German civilian population in those sectors. The authors credit British Air Commodore Rex Waite (rather than American General Lucius D. Clay) with drafting the plan for an airlift (dubbed Operation Vittles) to sustain the population and the garrisons. Using three airfields from June 1948 to June 1949, the Western powers airlifted nearly two million tons of food and supplies, effectively undermining the Soviets and keeping West Berliners from starving. The authors make a good use of primary documents to portray the broad political machinations of the time, yet neglect to offer voices from the civilian eyewitnesses. A final chapter, “Legacy of the Airlift,” covers such subsequent events as the erection of the Berlin Wall in 1961 and its dismantling in 1989.

A proficient overview, though skewed by its British orientation.