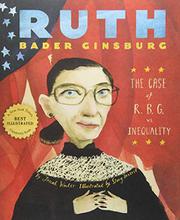 The Case of R.B.G. vs. Inequality

How did a book-loving girl grow up to be a Supreme Court justice?

“Ladies and gentleman of the jury,” the story opens, as a young white girl faces an audience to present evidence on how Ruth Bader Ginsburg experienced an “unfair world” of prejudice against Jews and females. Winter traces Ginsburg’s life from birth in Brooklyn in 1933 to college at Cornell and law school at Harvard and Columbia and, ultimately, to the United States Supreme Court, the second woman ever to be appointed. Each step of the way, she faced sexism and exclusion, effectively addressed as courtroom evidence. In exhibit A, she’s demoted and forced to take a pay cut in her first job out of college (before law school) due to pregnancy. Exhibit B presents the fact that Harvard Law School had no housing for women since there were only nine of them, and in exhibit C, women couldn’t enter the periodicals room—critical for completing coursework. The text, informative without overwhelming, is extended by an author’s note describing some of Ginsburg’s actual court cases (including her opposition to the Citizen’s United decision). Innerst’s stunning gouache, ink, and Photoshop illustrations employ an R. Gregory Christie–style of abstraction, from the dust-jacket portrait and the case cover’s clever depiction of Ginsburg and the scales of justice to the endpapers full of books, books, books. From cover to cover, a lovingly made volume that succeeds on every level.

A beautiful example of what a picture book can be.