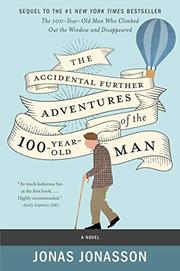 THE ACCIDENTAL FURTHER ADVENTURES OF THE 100-YEAR-OLD MAN

The hero (of sorts) has aged a year in this wildly implausible sequel to The 100-Year-Old Man Who Climbed Out a Window and Disappeared (2012).

Reaching age 101 hasn’t slowed Allan Karlsson, who travels from continent to continent with his thieving friend, Julius Jonsson. A hot air balloon becomes untethered in Indonesia, and the gentlemen are soon afloat in the Indian Ocean. A North Korean bulk carrier rescues them on its way to pick up four illicit kilos of enriched uranium in Madagascar. The ship’s captain takes them back to North Korea, where they meet Kim Jong-un and convince him that Allan is a nuclear weapons expert who invented “hetisostat pressure” and that Julius is an asparagus expert. Allan gives a North Korean engineer a formula for vitamin C and smelling salts, or possibly toothpaste and bleach. When Kim kicks the Swedes out of the country, Allan picks up a briefcase with the uranium in it—easy to do, since all North Korean briefcases look alike. Allan considers giving the uranium to Donald Trump until they meet and Allan decides that the U.S. president is “awfully close to exploding all on his own” and “should be diagnosed with something.” Then he writes a letter on three napkins to Angela Merkel, who comes across as the sanest person in the book. Early on, Allan obtains a “black tablet” that shows news, music, and naked ladies. Thus he learns more than Trump, who learns all that’s worth knowing from Fox. Allan and Julius meet a grocer/coffin-maker and help her sell designer coffins at a travel and tourism trade fair. Allan discovers Twitter and Facebook, Julius plants asparagus with an assist from Merkel, and a bad guy in Africa learns the hard way what lions like to eat.

Delightful nonsense that will lift a lot of spirits.