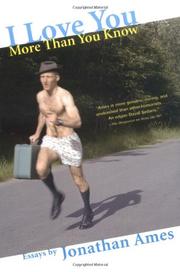 I LOVE YOU MORE THAN YOU KNOW

Humorist Ames (Wake Up, Sir!, 2004, etc.) presents previously published essays detailing the various ways in which he's stumbled, failed, disappointed himself and others and, occasionally, triumphed.

Ames seems to forever be searching for new ways to reveal his foibles to the reading public; for this author, there is no topic too intimate, sexual or scatological to share. But his latest collection lacks verve, drive and focus. Mostly, it feels lazy, or in need of a strong editor. Here, Ames rambles through personal anecdotes, discussing, among other things, a depressing interaction with a French prostitute, his irritable bowel syndrome, the details of a sex show in Amsterdam and a funny but still melancholy encounter with a suburban dominatrix, made more poignant by the fact that Ames had told his mother and child that he'd be at the library, working (the essay is made correspondingly less poignant by the maudlin way Ames beats his breast over his iniquities). Picking cysts, scratching his crotch, pondering the cause of his perplexingly itchy posterior, Ames invites readers along for all of it. He also frequently discusses his penis, in essays such as “Oh, Pardon my Hard-On,” “My Wiener Is Damaged!” and “How I Almost Committed Suicide Because of a Wart.” There are a couple of strong pieces—the titular essay is a warm reminiscence of visiting a beloved elderly aunt, and “Called Myself El Cid” is a lively account of Ames's days on the Princeton fencing team. In general, however, the author discusses his various shortcomings in a tone exuding regret, longing, gnawing professional envy and a self-absorption that allows him to publish work that is both exhibitionist and deeply self-critical.

Rare flashes of wit and energy, mostly drowned out by a sea of self-indulgent ramblings.