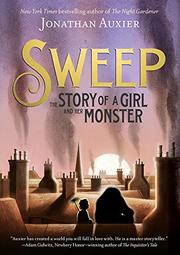 The Story of a Girl and Her Monster

A young chimney sweep gathers an unusual family around her in this bittersweet historical fantasy of love and loss.

Eleven-year-old Nan Sparrow’s only legacies from the Sweep, her beloved mentor, are his hat and a strange lump of charcoal. After her fiery near death lets her escape her abusive master’s control, this “char” awakens into a protective golem she names Charlie. Alas, Victorian London, however magical, is not kind to “climbing boys” of any gender—nor to monsters, nor to any of the odd lot of outcasts that Nan befriends. Auxier (The Night Gardener, 2014, etc.) turns his imaginative whimsy and lyrical prose to a real historical horror; while never gratuitous, he does not shy away from the appalling conditions under which children labor, nor does he ignore the sacrifices and struggle to abolish the practice. The inclusion of two (possibly three) Jewish characters suggests the intertwining of anti-Semitism and class exploitation, while references to such authors as William Blake, Daniel Defoe, and Mary Shelley demonstrate how literature could fire imaginations and highlight oppression. But the vivid characters—tough, whip-smart Nan; lovable, childlike Charlie; their engaging companions; even the marvelously Dickensian villains—prevent the story from becoming either dry history lesson or political screed. As Nan painfully, tentatively, haltingly permits love to make her vulnerable, she also gains strength and purpose: “We are saved by saving others.”

As heartbreaking as bleak midwinter—and as hopeful as early spring.