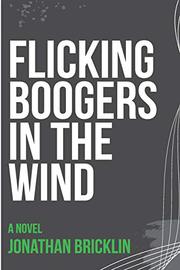 FLICKING BOOGERS IN THE WIND

Unseemly juvenile antics and unhinged philosophical yakking abound in this boisterous magical-realist novel.
Willy Nilly, a 10-year-old boy living on the outskirts of Bumpkinville, Montana, is a neurotic motor mouth with a grandiose imagination and a penchant for collecting “lucky” pennies—a habit perhaps related to the fact that a very unlucky lightning bolt felled his father. He’s full of cosmic ambition: He wants to be cryogenically frozen and then revived when medical science has cured old age so he can travel the universe in a spaceship. But his more concrete plans tend to misfire, such as a lemonade stand that’s immediately shut down for want of a permit. Better luck comes when he meets Daffodil Peacock, a new girl in class who lives in a palace and collects her own raspberry-flavored tears. They bond over a turtle named Bruce Lee that’s able to telepathically converse with Willy. Daffodil, Bruce and Willy become fast friends, practicing karate together, engaging in debates about “the merits of structuralism versus existentialism,” and mulling “an Aristotelian proof of the proposition that modern cooking shows are eerily similar to ancient forms of alchemical practice.” None of this goes anywhere in particular; instead, Daffodil heads offstage to experience thrilling adventures that readers don’t hear much about while Willy continues to conceive unlikely projects that predictably fizzle. Bricklin has a fertile, teeming comic imagination. However, there’s not much narrative payoff to it: The novel is mainly an excuse for regaling readers with twee notions, overextended japes and drolly precocious dialogue from the mouths of babes. The latter is sophomoric but in no way childlike, unless one knows any 10-year-olds who ask for James Joyce’s Finnegans Wake as a bedtime story. The prose seems overly pleased with its own showy erudition (“I felt like a Roman soldier being ambushed by the Germanic war chief Arminius at the Battle of the Teutoberg Forest”) and sometimes mistakes verbosity (“But is my brain me or am I my brain or am I not my brain or is it the same?”) for profundity. The result often feels as pointless as the title might suggest.
A frenetic but feckless fantasia.