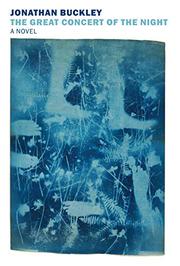 THE GREAT CONCERT OF THE NIGHT

A diary-keeping museum curator builds a relic of words for his dead lover.

Having spent a solitary New Year’s Eve alone watching a film in which his former lover Imogen starred, David—a middle-aged man who’s “happier living in the past”—begins a diary into which he pours a lyrical disorder of fragments: He describes Imogen’s often risqué, avant-garde films; he meditates on the Catholic veneration of saints and relics; he describes the financially ailing Sanderson-Perceval Museum, where the items on display—“the velvet mushrooms, the glass jellyfish,” the “excavated” remains of a stillborn child—“belonged together only because they had been collected”; he writes about Imogen’s long decline through illness to death; he charts the progress of a homeless man working to put his life back on track; and, collected alongside one another in David’s diary, these disparate writings slowly refract back to Imogen, adhering into something of a reliquary of words. Novels made of nonlinear fragments—see Jenny Offill’s Department of Speculation, Peter Rock’s The Night Swimmers, or David Markson’s Wittgenstein's Mistress—tend to self-consciously declare their form as their philosophy; Buckley’s (The River Is the River, 2015, etc.) latest novel is no exception. Through David, Buckley meditates on the unbridgeable gap between thoughts and expressions: “Words do not preserve the person; they are not held in a colorless medium of language.” Later the topic is the unbridgeable gap between memory and life: “When I think of Imogen, what presents itself to my mind is not a story….A story, a life, is something one makes; it is not what one remembers.” Readers who dislike artsy books told in nonlinear fragments will undoubtedly dislike this one; but for the rest of us, David’s diary is actually something of a triumph. It contains moments of astonishing lyricism: A museum’s objects “are like stars, small pieces of light from distances that cannot be bridged.” It contains moments of dark humor: Imogen (an actress, remember) “did not feel that she was an insecure person. On the contrary, she said, she was absolutely secure in the knowledge that there was no secure entity behind the name Imogen Gough.” And, ultimately, Buckley’s novel is both very entertaining and very sad—a book of high artifice that feels true.