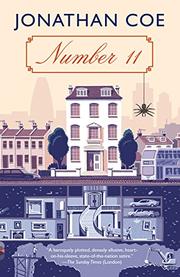 The political and cultural state of contemporary Britain is dissected in this multistrand novel.

Coe's book is a sequel to The Winshaw Legacy (1995), a deadly serious satirical tale in which Thatcherism paid for its crimes through the merciless and meticulous dispatch of a family of right-wing upper-class monsters. Revenge is meted out here as well, in a much more fantastical way. The anchors of the story are two women, friends, whom we follow from girlhood, where they meet at a private school, to adulthood, where their lives have diverged. Rachel, who goes on to become the nanny to a horrendous upper-class family which embodies the greed of the new gilded age, is as a child obsessed with the suicide of U.N. weapons inspector David Kelly near the beginning of the Iraq War. Rachel's friend Alison watches her once briefly famous mother humiliate herself to get back into the spotlight. The misunderstanding that separates the two for many years can be read as a pithy comment on how we now accept the alienation technology has brought into our lives. The other strands of the story—involving a faded pop star, an academic whose dead husband was obsessed with tracking down an obscure German film, and the surviving tentacles of the Winshaw clan—add up to a picture of the U.K. from the time Tony Blair pulled the country into the Iraq War to the present day and its legacy from Thatcher: the rich in a state of permanent ascendancy and the social contract shredded by engineered ruthlessness which leaves Britons in a continual state of want or, in the case of those who can't afford live-saving medicine, dead. The tone is not so much anger as a state of settled disgust at the death of shame. Sections on the squalor of reality TV and the mob mentality the internet has brought about are particularly lethal. The denouement plays like Creature Feature by way of the Old Testament.

This powerful and enthralling novel takes the measure of a society feeding on its members as little contemporary fiction has.