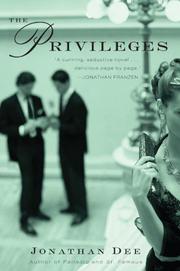 Gilded young go-getter creates, not always legally, a cocoon for his family in Dee’s mostly buoyant fifth novel about money, family and mortality.

Adam and Cynthia Morey, Midwestern transplants in Manhattan, have beauty, brains, charm and a formidable determination to carve out a comfortable world for themselves, though they do not come from money; Adam’s father was a pipe fitter. The couple, married when they’re only 22, have some simple rules. Forget the past. Seize the day. Keep in shape. Glow! Two kids, April and Jonas, arrive early; no problem. Adam has the Midas touch and the trust of his boss at his private-equity firm. Honoring complexity, Dee (Palladio, 2002, etc.) refuses to paint Adam as a total narcissist or philanderer. Unlike his peer Sherman McCoy in Bonfire of the Vanities, Adam has a doglike devotion to his wife, the stronger character. They dote on their kids; family means this charmed circle of four. Everyone else is an outsider. When her stepsister has a breakdown, Cynthia dumps her like somebody else’s garbage. Dee tracks the Moreys over 20-plus years as they strive for a life without limits. Their sex life still sizzles; aging is forbidden; their money keeps growing, helped by Adam’s involvement in insider trading, a risk he enjoys. Still, we ignore limits and connectedness at our peril, and that’s Dee’s theme, implied without glib moralizing. The novel’s final third turns darker. Both parents are frantically busy, heavily involved in charity work; they’re boldface names, with their own foundation. Then Cynthia takes a time out; her dad is dying in a Florida hospice and she feels uncharacteristically bereft. The pampered college-age kids appear trapped. April is spiraling downward; drugs, meaningless sex. Jonas, an art student and half-hearted rebel against his family’s values, almost loses his life to a madman because of his lack of survival skills.

Thoughtful and bracingly unpredictable, though the lack of a resolution is frustrating.