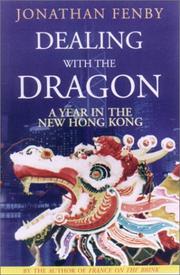 DEALING WITH THE DRAGON

A Year in the New Hong Kong

A considered reading of the first two years of Chinese rule in Hong Kong.

From his perch as editor of the South China Morning Post, Fenby (France on the Brink, 1999) takes measure of Hong Kong during the year 1999 (his account is structured primarily as a diary of telling events). Business continues to rule, Fenby understands, and its practitioners are lords of this universe, and as a result of “an accident of history and geography, it has become a theatre for major questions of our times, not in theory but in everyday life.” But one of the problems of his account is exactly that: its dearth of the everyday. Although the diary approach allows Fenby to rattle on like a police blotter of crimes and misdemeanors that are a staple of Hong Kong business, too often the sense of place he conjures has the superficiality of headlines or, worse, day-old news. He relies heavily on the glitterati for its flash, and the mobile phone is the kind of indicator species he uses to gauge economic and social health. There are pieces on the absurd level of corruption in business and government, the mistreatment of domestic help, a note on the passing of Deng Xiaoping and on the influence of tongs and triads. That the Chinese government has made, and continues to make, inroads into the political process of Hong Kong hardly shakes anyone awake, despite Fenby’s portentous rumblings on “the steady advance of weak-kneed consensus, the over-riding exercise of authority by the executive and the erosion of the rule of law.” An astute vignette on the quietly bustling Macau, another colony recently returned, serves to highlight the glancing qualities of so much else in these pages.

Too broad-stroked a portrait to effectively assess the changes afoot in Hong Kong’s postcolonial future.