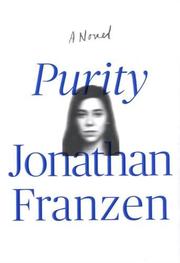 Purity "Pip" Tyler, the hero of Franzen’s fifth novel (Freedom, 2010, etc.), is a bright college grad with limited prospects: burdened with student debt, she lives in an Oakland squat, makes cold calls at a go-nowhere job, and can’t stray far from an emotionally needy mom who won’t reveal who her dad is. A German visitor, Annagret, encourages Purity to intern in Bolivia for the Sunlight Project, a WikiLeaks-style hacker group headed by the charismatic Andreas Wolf. Skeptical but cornered, Purity signs on. The names alone—Purity, Wolf—make the essential conflict clear, but that just frames a story in which every character is engaged in complex moral wrestling. Chief among them is Andreas, who killed Annagret’s sexually abusive stepfather and has his own issues with physical and emotional manipulation. But he’s not the only one Franzen dumps into the psychosexual stew. Andreas’ friend Tom Aberant is a powerful journalist saddled with self-loathing and a controlling ex-wife who detests her father’s wealth; Tom’s lover (and employee), Leila Helou, is a muckraker skilled enough to report on missing warheads but fumbling at her own failed marriage to Charles Blenheim, a novelist in decline. In Freedom, everybody was eager to declaim moral certitudes; here, Franzen is burrowing deep into each person’s questionable sense of his or her own goodness and suggests that the moral rot can metastasize to the levels of corporations and government. And yet the novel’s prose never bogs down into lectures, and its various back stories are as forceful as the main tale of Purity’s fate. Franzen is much-mocked for his primacy in the literary landscape (something he himself mocks when Charles grouses about “a plague of literary Jonathans”). But here, he’s admirably determined to think big and write well about our darkest emotional corners.