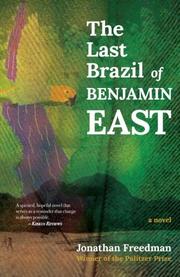 THE LAST BRAZIL of BENJAMIN EAST

A returned expat and a young artist take a road trip across America.

This novel from Freedman (Bounce, 2011, etc.), a Pulitzer Prize–winning journalist, is a tale of reinvention and second chances. Serial entrepreneur and perpetual optimist Benjamin East left America nearly 40 years ago to try his luck in Brazil. Now, it’s 1980, and having lost both his fortune and his beloved wife, Gisela, he steps off the plane in Miami, hops on the Greyhound, and heads north, intent on selling his quirky first novel to a New York publisher. In Washington, D.C., he’s waylaid by the decades-younger Amy, who’s fleeing her abusive husband. Somewhat implausibly, Amy begs Benjamin to accompany her to New York, where she hopes to become an artist. Both get a rude awakening in Manhattan. Publishers dismiss Benjamin’s writing as amateurish, while Amy’s work is deemed too primitive for art school. This unlikely pair then light out for San Francisco, believing that California will be more welcoming to a pair of outcast dreamers. Along the way, they begin to understand what they’re really searching for. Benjamin is a classic American huckster and a salesman (he claims to have invented the phrase “the Big Apple”) who is by turns charming and grating. His fast talk exhausts, but his desperate last-chance attempts at success are touching nonetheless. In the most affecting passages, he reflects on his early days in Brazil and his relationship with Gisela, which seemed promising but became as “meandering as the River of Doubt,” marred by disappointments both personal and professional. His unlikely relationship with Amy is surprisingly complex, though there are moments when she comes across as more of an aging man’s sexual fantasy than a person. And most of the people Benjamin and Amy encounter on their journey, like pompous writer Joshua and cowboy-drifter Maynard, are little more than stock characters. Yet Freedman pulls it all together in the final pages with an ending that embraces the “infinite possibilities” of life.

A spirited, hopeful novel that serves as a reminder that change is always possible.